I have been into fishing for salmon and steelhead for as far back as I can remember. I started salmon fishing at a very young age. I was fortunate to grow up a few minutes walk to a stream that had a healthy population of migratory king and coho salmon, as well as large steelhead, rainbow, and brown trout. By the age of twelve, I had caught more salmon than most will in a lifetime. While most kids idolized sports figures, I grew up watching and reading about the legends and fishing greats like Del Brow, Lefty Krey, Flip Pallot, Jose Wejebe and countless others. As my friends were tackling dummies at football practice, I was roll casting into a river that had a fresh push of steelhead in its tail-out. Fishing has stayed with me through out my life. I have fished everywhere my travels have taken me: countless places along the Northeast coast, the Florida Keys, the South West, West Coast, Alaska, Canada, Japan, and all over the Caribbean.

I was also fortunate to grow up on the East Coast of Lake Ontario in the summers, where I spent most of my time on the water fishing out of anything that would float. At eighteen I started chartering and navigating a twenty-eight foot fishing charter boat through a massive salmon troll fleet that once blanketed Mexico Bay and Lake Ontario area during late August and early September. This was the heyday of the Lake Ontario fishing charter fleet, before the poor salmon and steelhead returns in the late nineties that diminished this fleet to only a handful.

This came at a good time because it allowed me to focus on something besides fishing. I took a little time off from fishing and guiding to attend and graduate from Syracuse University with a bachelor’s degree in Psychology and Political Science. Syracuse was a great university for me to go to because not only was it an excellent education but it also was only a thirty-five mile drive back home to Pulaski.  I was able to continue chartering and guiding during this time, although on a much more limited basis. After college I moved to Manhattan for a year and tried a few different jobs.  My first job was for a hedge fund on wall street, which was short lived for many reasons. My second job was in the real estate industry in the city, again not my style. My last job was at the Orvis fly fishing store on 44th St and Fifth Ave as an assistant manager. It was their flagship store and a mecca for fishermen living in the city or passing through. Some of the best guides, big game fishermen, sport fishing writers, long distance fly casters, famous fly tiers, and a whole bunch of others came through the shop, selling books and trips, or giving seminars and talks. As much as I enjoyed being around some of the greatest people in the fishing industry, it made me miss guiding and being on the water everyday.

During my time living in Manhattan I was almost weekly taking cheap Jet Blue flights up to Syracuse, getting a ride home to Pulaski, and running either my drift boat or charter boat on some weekends. This was becoming too much to handle, and I knew I didn’t want to be in the city any more.  That week I heard a few striper guide friends talking about some fishing they had done in Alaska and how a few of the lodges were understaffed for guides. I did a little research, found an area that fished similar to the way I did at home, and started calling lodges in Alaska. I found one that needed a drift boat guide on the Kenai River.  In 2003 I took a chance and flew to Alaska, not knowing anyone beside the guy at the lodge I was going to work for. I worked for this lodge for three months until my contract was up. I bought a boat before I left Alaska and opened my own business on a different river the following year. I continued this business for fifteen years. I ran my Alaska business from May to September and ran charter and drift boats on the Salmon River and Lake Ontario from September to May. I sold most of my Alaska business in the fall of 2018.

After fifteen years as a business owner and captain in Alaska, I decided that was enough and wanted to stay home for the summers. I currently own and operate a 31 Tiara Express charter boat out of the Salmon River Lighthouse & Marina in Port Ontario, near Pulaski. I also have continued to operate my drift boats on the Salmon River and other tributaries since 1998.  Between the lake and the river I am on the water three hundred days a year. This will be my twenty-fourth season as a guide and charter captain. 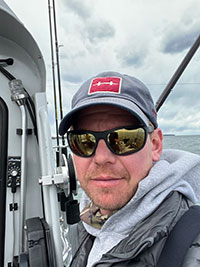